From SRM
Jump to navigation Jump to search

The mechanical adjustment of the SRM – Ergometer allows the rider to find his individual positioning.

Positioning of the athlete

Before every performance diagnostic you have to check the positioning of the athlete.

Optimizing individual positioning is quickly achieved by adjusting the saddle and handlebar vertically and/or horizontally. To do so you have to open the locking lever. Because of a ruler which is attached to the saddle post you can reproduce your perfect positioning. If adjusted correctly, it should be easy to move the vertical and horizontal stems when the quick release is open. A 5 mm Allen key situated on the saddle and handlebar mounts allows for further rigidity.

The prolongable crank has round markings every 2.5 mm and every 10 mm a line. If the steel element of the crank is completely retracted in the aluminium crank the minimal length of the crank arm is 150 mm. If the crank arm is completely pulled out, the maximal length is 190 mm. Before changing the crank arm length you have to open both Allen screws.
After adjusting the right crank arm length, please tighten the Allen screws again with a maximal torque of 10 Nm so that they won’t come loose while you ride the Ergometer. Make also sure that the screws are situated with a distance of a 2.5 mm. This can be determined when the fixing spring (situated between the Allen screws) locks into the holes of the steel element of the crank. Please do never remove or adjust the fixing spring.
From time to time it is necessary to grease the steel elements of the crank to protect them from sweat and to maintain the free movement.

The SRM ergometer includes a standard saddle. A lot of professional cyclists have there own specialized saddle. So it is important to be able to remove the saddle. The following images show how it is done.

With the removal of the two upper screws you will be able to remove the saddle. The bottom screw provides a platform within the pipe of the saddle. This platform keeps the saddle right at the top, so there aren't any problems with the adjustments of the saddle during bike fitting. 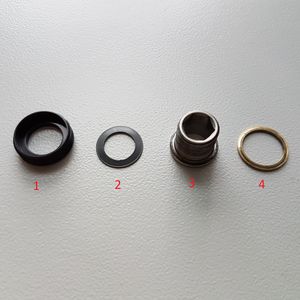 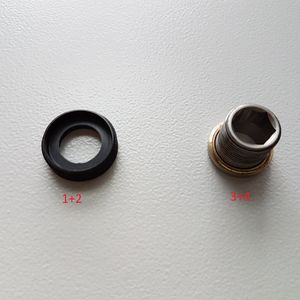 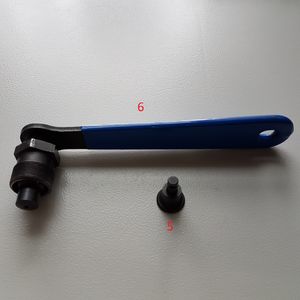 By following these 12 steps you will be able to remove the cranks of the ergometer. The three images on the right provide an overview of the used materials.

The mass moment of the athlete during cycling causes above all an approximately constant angular velocity of the pedaling circle, although the cyclist´s torque (power) is nearly zero when the cranks are in vertical position. If the Ergometer had no fly mass, the cadence would decrease to nearly zero with this crank position and a high power output. This would result in a very noncircular tread then.

In the following figures it is shown how to create a drive with both the fly masses and the gearbox which is approximately identical to the driver´s weight.

Please keep in mind that in a power-orientated test the change of regulation (hunting) increases linear to the fly mass-range in the single power steps. If one likes to have a change of regulation as little as it can be, it is best to ride in 3rd or 4th gear. It is also helpful to change to a smaller gear, when the no load-friction of the Ergometer in the 3rd or 4th gear is higher than the power at the beginning in an incremental stress test. In the 4th gear the no load-friction is about 80 watts with a cadence of 90, in the 1st gear it is about 30-50 watts. Therefore it is not possible to regulate less than 30-50 watts.

But please consider that the Rohloff gear box for regular performance diagnostics and step testing should be used in gear 8 or 9 (s. picture). The fly masses can easily be changed after taking off the left ergometer lid by loosening the brass-coloured counter-nut. Hand-tight fastening is enough. The small fly mass weights 4.6 kg and the big fly mass weights 9.1 kg.

The default configuration for the most common Ergometer tests is installing the LARGE fly mass inside the gearbox only. Please remove the SMALL fly mass as described below. 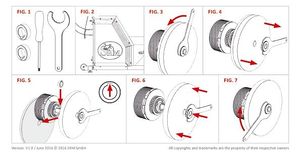